Princess the Raccoon is Given a Second Chance

Many raccoons have come to the Bay Beach Wildlife Sanctuary this summer, but there was one that stood out from all the rest. Based on the information given to us by the person who brought it in, this raccoon was about six weeks old. At this age, a healthy raccoon is fully furred, the markings are becoming more distinct, and the raccoon will begin to eat solid food. However, this raccoon, named Princess, was practically hairless, had a belly about the size of a grapefruit, suffered from diarrhea, and rarely stopped crying out.

Most of these symptoms were caused by malnutrition. It turned out that the person who found Princess kept her for about a month. Princess is just one example of why it is important to take any injured, ill, or orphaned wildlife to a wildlife sanctuary or licensed rehabilitator where there are people that are trained and licensed to take care of them. Trained rehabbers know how to properly take care of wildlife and raise them in order to prepare them to be released successfully back into the wild.

Malnutrition is not the only challenge for untrained/unlicensed people who keep wildlife. Caring for wildlife can be risky due to the possibility of transmitting diseases, such as rabies and parasites. Plus, there is always the chance that the animal could become imprinted or habituated if it is not around others of its own kind. Also, it is actually illegal to keep wildlife for more than 24 hours. This time is supposed to be spent finding a wildlife sanctuary or rehabilitator to take the animal to.  Although people may think they are helping the injured, orphaned, or ill wildlife that they find, keeping the animals to raise on their own can do more bad than good.

The Bay Beach Wildlife Sanctuary is here to not only provide a place for animals that need a second chance, but to also help others help wildlife! If you want to become a wildlife rehabilitator, the best way to start is by volunteering with a local facility or rehabber-- they would appreciate the help! Contact your state Department of Natural Resources wildlife rehabilitation liaison and find out how you can start the work of obtaining your own license as well! The Bay Beach Wildlife Sanctuary offers volunteer opportunities and internships in the wildlife rehabilitation/animal care department. BBWLS also has a training for interested wildlife rehabilitators every March! Watch for the date on our website BayBeachWildlife.com and help us give critters like Princess a second chance! 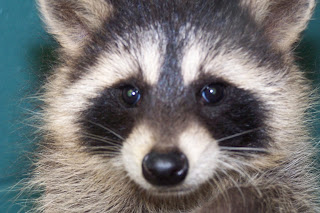 On Friday, September 6, 2013, Wisconsin Department of Natural Resources conservation Warden Darren Kuhn rescued an American White Pelican and brought it in to the Wildlife Sanctuary. Upon a closer look, this beautiful bird could not swim, fly, or eat due to an 8 inch musky lure attached to its foot and wing. The barbs on the lure did not allow the lure to be extracted easily. After administering pain medication, our staff helped this pelican by working to remove the lure as efficiently as possible. For an injured animal, the pain of the injury is only half the battle-- the other half is the stress of being held down by the "human predator", even though we are helping this beautiful bird.

After removing the lure, the pelican was able to walk, hydrate with some water, and eat a hearty meal of smelt. The pelican will need to be kept in captivity as it heals from its wing injuries, but we hope to return it as soon as possible to our lagoons so the pelican may flock up with others on the way to their winter migratory home.

Bay Beach Wildlife Sanctuary would like to thank the WDNR, the diligent public that noticed this pelican was in need of help, and all of you for your support so we may help thousands of animals become Wild Again!
Posted by Come Visit Us! at 9:16 PM 1 comment:

In June of 2010 six orphaned raccoons, about 5 weeks old, were brought into the Wildlife Sanctuary. The man who brought them in said their mom was shot and killed. All six of the raccoons were examined, rehydrated and sent home, with one of our trained R-PAWS volunteers. A few days later the rehabber brought one of the male raccoons back to the Wildlife Sanctuary. She was concerned about the raccoon because he had a small, very hard mass in his abdomen. The mass was assumed to be hard stool that hadn’t passed yet. Upon examination of the mass, though, it was discovered to be a small bullet. An entrance wound was also found on the raccoon’s back. The little critter was sent to Gentle Vet Animal Hospital in Green Bay. There he was examined by a veterinarian, had an x-ray taken of his abdomen and had surgery to remove the bullet. Luckily for the little guy, the bullet missed all his major organs! The raccoon was sent back home with the rehabber on strict cage rest. He was given a pain medication and an antibiotic for one week following his surgery. After a speedy recovery, he was able to join his siblings again in their large outdoor cage. In mid-September,”Bullet” and his siblings were released back into the wild. Without the generous donations and large amount of money raised at our special events, like the Walk for Wildlife, “Bullet” would not have been able to receive the care he needed to be wild again! 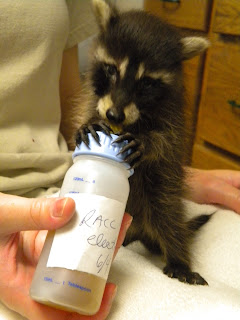 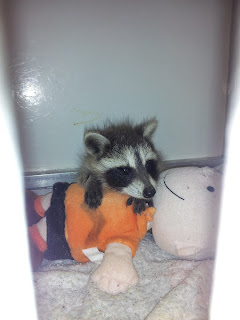 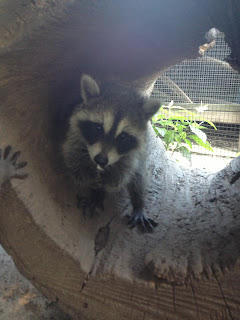 Helping Wildlife Through the Storm

﻿ In the early morning hours of August 7, 2013, devastating storms and 5 tornadoes came through Northeast Wisconsin. Thousands of people’s homes and lives were affected. Along with this, 45 animals were brought into the Bay Beach Wildlife Sanctuary looking for assistance. From broken wings, to head injuries, to losing homes and nests of their own, these animals needed help. Generous members of the public, cleaning up their own homes and nests, took the time to bring these animals to us so we can offer warmth, proper food, and a chance to recover to be wild again. The different species included: Gray Squirrels, Eastern Cottontails, Virginia Opossums, Belted Kingfishers, House Finches, American Robins, Mourning Doves, Eastern Bluebirds, American Goldfinches, Cooper’s Hawks, Red-Tailed Haws, Merlin Falcons, American Kestrels, Great Blue Herons, and Warbling Vireos.


﻿﻿﻿ The following photos show our Wildlife Rehabilitation Interns in action caring for these animals. All the funds and donations from Walk for Wildlife being held on Saturday, September 21, 2013, go directly towards helping animals in need, like these little ones:

VOLUNTEER APPRECIATION WEEK!
April 21-27 is National Volunteer Appreciation Week and we couldn't let the week go by without honoring our great Sanctuary volunteers. You all put in countless hours to help the Sanctuary be the wonderful place that it is today. Thank you all!


It's Volunteer Appreciation Week and it's you we seek!
Although this week is set aside for special recognition,
It's every day we appreciate your passion and ambition.
No matter the day, the month or the year,
Our volunteers are always here.
You brighten our day by coming through the door,
never complaining and always asking to do more.
You help make the Wildlife Sanctuary a wonderful place,
Your hours of dedication, all with a smile on your face.
So thank you for being a volunteer, we're privileged to work with you.
We want you to know how appreciated you are, not just today, but the whole year through.

Valuable is the work you do
Outstanding is how you always come through
Loyal, sincere and full of good cheer,
Untiring in your efforts throughout the year.
Notable are the contributions you make.
Trustworthy in every project you take.
Eager to reach your every goal.
Effective in the way you fulfill your role.
Ready with a smile like a shining star,
Special and wonderful - that's what you are!


Thank you from all of the Staff and critters of the Bay Beach Wildlife Sanctuary!
Posted by Come Visit Us! at 1:41 PM No comments:

First Red-wing Blackbird males of the spring arrived at Nature Center feeders yesterday. We are still seeing otter track around the buildings and sightings in the lagoons along East Shore Drive. Many Bald Eagles flying in and out of the Wildlife Sanctuary daily.
Posted by Come Visit Us! at 10:24 AM 1 comment:


Here in Animal Care at the Bay Beach Wildlife Sanctuary, we have some very special residents the community has come to know well--- our White-Tail Deer! Currently, we have 4 ladies that have come to us with many different stories to become the friendly ambassadors we know today.

“Laura” is the friendliest of the 4 does. She came to WLS in 2006 as a fawn. Our goal with her, as with all wildlife, was to be released back into the wild. As she developed, we observed she had problems with her hind legs—she had an injury that caused her to be unsteady and not able to run as well as she should. The decision was made that she would not be successful out in the wild where running and protecting with hooves is essential to a white-tail’s survival. She has done well with WLS, maneuvering on the rocky areas to greet people coming into the Deer Habitat!

In 2009, Animal Care received a call that someone had a fawn and needed to get her into a rehab program. Much to our surprise, the little fawn we were expecting ended up being “Little LuLu”—a yearling doe! She is the tallest of our little herd and still leery of people. Unfortunately, being raised illegally by humans the first year of her life has left her unable to survive on her own, but also not as trusting to people. She comes up to the staff and public, but is always a few steps behind. Lu is a great example that when a young fawn is found, the best thing to do is to call a wildlife rehabber—Mom may be near watching the youngster. Natural mothers always do the best job caring for young and keeping them in the wild where they belong.

In 2009, WLS was able to give homes to 2 survivors that could not be released back into the wild. “Dani” is our smallest doe. She was found very young with another youngster next to her and an adult doe nearby—the adult doe was killed by a car. The other fawn, what we considered a sibling to Dani, grew strong, thriving in rehab care. Dani did not do very well—she was always quite weak and did not grow as quickly, unfortunately limiting her ability for release.

Our other 2009 fawn is appropriately named “Lucky”—and due to the quick thinking of some wildlife lovers, she ended up with a lucky outcome! Lucky was found in the Northwoods after a bear that was carrying her for a meal dropped her. Members of the public, Gerry and Shirley, were able to find Lucky and bring her to WLS. Lucky had a severe neck injury and was in a very critical state for 2 months, needing physical therapy and special feedings to help her hold her head up and stand once again. As we worked with Lucky, she became habituated on humans which made her an unsuccessful candidate for release, but a great fit for our little herd!

You can meet our deer daily in the Deer Habitat by the Woodland Building. They live with sandhill cranes and turkeys and greet everyone that comes in! You may get to know them by feeding them corn from the Observation Building or deer pellets from dispensers in the Deer Habitat area. Meeting our “Dear Deer” is a great time and a memorable experience!  Hope to see you soon! 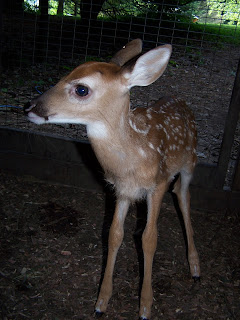 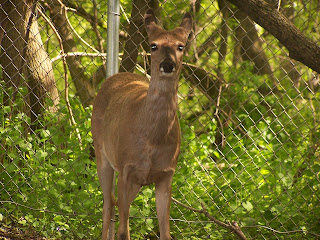 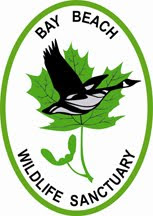